In this paper, we investigate the constrained shortest path problem where the arc resources of the problem are dependent normally distributed random variables. A model is presented to maximize the probability of all constraints, while not exceeding a certain amount. We assume that the rows of the constraint matrix are dependent, so we use a marginal distribution of the Copula functions, instead of the distribution functions and the dependency is driven by an appropriate Archimedean Copula. Then, we transform the joint chance-constrained problems into deterministic problems of second-order cone programming. This is a new approach where considers the dependency between resource consumptions and connects Copulas to stochastic resource constrained shortest path problem (SRCSPP). The results indicate that the effect of marginal probability levels is considerable. Moreover, the linear relaxation of SRCSPP is generally not convex; thus we can use lower and upper bounds of the second-order cone programming approximation to solve the relaxation problem. The experimental results show that the SRCSPP with Copula theory can achieve efficient performance. 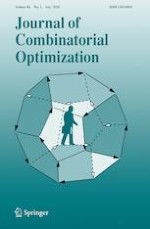 Classification optimization for training a large dataset with Naïve Bayes

The strong chromatic index of graphs with edge weight eight

New restrictions on defective coloring with applications to steinberg-type graphs