Protein-based materials have attracted a tremendous attention to the growth of polymer films and protein-based coating. Efficiency of Kafirin film and effect of Kafirin film as an enteric coating for drug release was studied. The cast films with varying plasticizer concentrations (polyethylene glycol-300) were tested for mechanical tests (Tensile, Young’s, Elongation) and further analyzed with DSC and TGA analysis. Swelling behavior and FTIR were performed to ensure medium uptake and inter- and intra-molecule structural changes. All together for enteric coating, capsules filled with Paracetamol were dip coated in Kafirin solution with 20, 30, and 40% of PEG plasticizer of drug release study. Dissolution studies demonstrated zero release upon exposure to 0.1 N HCl of pH 1.2 for initial 2 h, and gradual release was observed upon exposure to phosphate buffer of pH 6.8. The effect of plasticizer concentration was noticeable in the case of HPMC capsules, and drug release declined with the increasing plasticizer content. Whereas, in case of Gelatin opposite results were obtained. This work has shown that Kafirin protein has a potential for use as an enteric coating for drug delivery application. 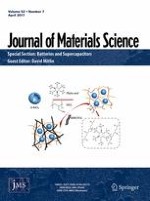 Electron backscatter diffraction and performance of a severely deformed steel