Reaction kinetics of methane combustion is investigated on Co3O4 and Pd/Co3O4 (0.27 wt% Pd) catalysts for a fuel-lean feed. The temperature ranges between 250 and 550 °C in the presence of 5 and 10 vol% water with CH4 concentrations that varied between 1000 and 5000 ppmv. Significant cobalt oxide contribution to the activity of the bimetallic catalyst is observed, especially at higher water concentration and lower temperature (up to 70%). Co3O4 demonstrates first order to CH4, 0 order to H2O and activation energy of 69 kJ/mol. Pd/Co3O4 catalyst shows first order to CH4, negative 0.37 order to H2O and an observed activation energy of 90.7 kJ/mol, which is corrected for water adsorption to 60.6 kJ/mol. The latter is a typical activation energy for Pd/Al2O3 catalyst at similar conditions, indicating that the Co3O4 contribution is not only in performing the methane combustion itself but also in supplying surface oxygen rather than in affecting the activation energy. The kinetic evidence shows that the observed behaviour of Pd/Co3O4 catalyst is not a summation of individual activities of Co3O4 and Pd, but rather the effect of strong metal-support interactions (SMSI). 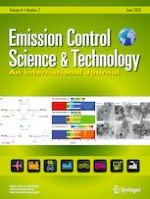 Approaches for a New Generation of Fast-Computing Catalyst Models

Special Article from the ETH Conference 2018