Kinetics of the production of chain-end groups and methanol from the depolymerization of cellulose during the ageing of paper/oil systems. Part 2: Thermally-upgraded insulating papers | springerprofessional.de Skip to main content
TOOLBAR 1 2 3 4
SUCHE MENÜ 1 2 3 4

In order to go further in demonstrating that methanol can be used as a universal cellulose degradation indicator in power transformers, the ageing study of standard wood kraft specimens in oil in the range of 60–130 °C (Gilbert et al. in Cellulose 16:327–338, 2009) has been extended to thermally-upgraded (TU) papers. The kinetic model that best tracks the ageing patterns was shown to be a function that can accelerate or decelerate the pseudo-zero kinetics by the adjustment of a free parameter. The results showed a non-negligible contribution of 1,4-β-glycosidic bond breaking in the crystalline regions suggesting that the degradation at this level is not necessary occurring through a quantum mode mechanism. The results also showed a significant error in the determination of the rate constants when obtained from isotherms of varying degree of depolymerization. In the case of TU papers, provided that there is a sufficient amount of stabilizers in the fibrous structure, not only could the self-catalyzing nature of the cellulose ageing process as well as the effect of an external supply of catalysts be lost but the chain-breaking could decrease to nearly zero for an undetermined period well before reaching the levelling-off degree of polymerization. The initial rate constants (k 1o) for the depolymerization and methanol formation of these papers were found to be very near those of standard cellulose (giving about the same activation energy), which indicates that they are obtained from the ageing patterns well before the retardant action has fully taken place. The life extension of TU papers is achieved by a reduction with time of the frequency at which the bonds are ruptured. Moreover, the production of methanol and chain-end groups showed about the same value for the frequency factor, which introduces the possibility that the rate of production of CH3OH from chopped chains is much higher than the rate of depolymerization, so that the latter becomes the rate determining step of the overall reaction. On the other hand, the apparent yield of CH3OH molecules per scission is seen to increase substantially with the amount of stabilizers (from ~0.4 to 0.8 and to 1.4 for a paper containing 0 to 1.15 and to 3.9% (w/w) N2) and to a lesser extent, with the moisture in the specimens. However, these variations could either be attributed to a modification of the CH3OH paper/oil partitioning by the stabilizers and moisture in fibrous structure. Finally, pre-aged systems (130 °C for 168 h) conditioned at 20 °C for variable lengths of time provided further evidence that O2 is not necessarily involved in CH3OH production. 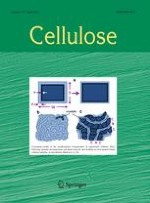