The problem of torsion superimposed on extension of incompressible nonlinearly elastic solid circular cylinders is a classic problem of nonlinear elasticity that has been considered by many authors in the context of rubber elasticity particularly for isotropic materials. An interesting aspect of such problems is the instability that arises with sufficiently large twist where a kink or knot suddenly appears. An energy approach to examining this instability when the extension and twist are prescribed was given by Gent and Hua (Int. J. Nonlinear Mech. 39:483–489, 2004) and illustrated there for a neo-Hookean isotropic elastic material. The theoretical results were compared with experimental observations on natural rubber rods. In a recent paper Murphy (Int. J. Nonlinear Mech. 68:96–100, 2015) has shown that the approach in Gent and Hua for isotropic materials can be simplified when the rods are assumed to be thin. Motivated by potential applications to the biomechanics of soft tissues, we are concerned here with the implications of this simplified thin rod instability theory for transversely isotropic materials. The results are illustrated on using three specific strain-energy density functions. These models are quadratic in the anisotropic invariants, linear in the isotropic strain invariants and are consistent with the linear theory. In contrast with the case for isotropic materials, it is shown that the kinking instability arises even in the absence of stretch that is in the case of pure torsion. The results are illustrated on using elastic moduli for muscles based on experimental findings of other authors. 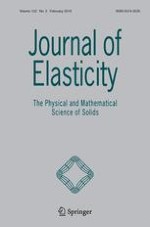 A Remark on Polyconvex Functions with Symmetry