This article deals with Kurt Wolff’s interpretation of Karl Mannheim, with reference to his writings on social planning. Wolff’s interpretation is presented and discussed in the context provided by other interpreters of Mannheim. They have, generally speaking, given scant attention to the late works by Mannheim, and rather focused on Ideology and Utopia, Mannheim’s most celebrated work. Interpreters who have considered these writings on planning have been mostly or entirely critical of them, objecting to their vagueness and inadequacy as a project of social reform, and the unsatisfactory conceptualization of the élites. These objections have been raised by several interpreters of different ideological persuasions, from the Marxist thinkers Adorno and Lukacs to the conservative T.S. Eliot. Wolff’s interpretation stands out in that it pays less attention to the social and political contents of Mannheim’s reform project, but brings into light its psychological background; namely, the deep anguish Mannheim experienced because of the widespread tendencies to the formation of a mass society, prone to the forces of irrationalism and authoritarianism. A perusal of Mannheim’s works on planning bears out Wolff’s interpretation. 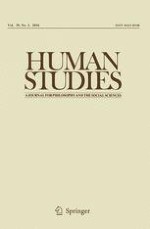 Modernity and Evil: Kurt H. Wolff’s Sociology and the Diagnosis of Our Time

Is It Possible to “Incorporate” a Scar? Revisiting a Basic Concept in Phenomenology

The Dynamic Association of Being and Non-Being: Heidegger’s Thoughts on Plato’s Sophist Beyond Platonism

Beata Stawarska: Saussure’s Philosophy of Language as Phenomenology: Undoing the Doctrine of the Course in General Linguistics