Restitution coefficients are used to quantify the energy dissipation upon impact when predicting rock fall events. These coefficients can be determined in situ or in the laboratory. In any case, the usual values for the normal restitution coefficient k n are below unity. Values greater than one are quite rare, seen as unusual and barely explained. Previous experimental research conducted in Australia has shown consistent and systematic values of the normal restitution coefficient greater than one. This was tentatively explained by a combination of parameters such as low impacting angle, rotational energy and block angularity. The study presented in this paper aims at (1) identifying the critical parameters conducting to high k n values and (2) at explaining the associated motion mechanisms. The objective was reached with values of k n up to almost 2. In addition, the study has confirmed the significance of low impacting angle, rotational energy and block shape in this context. 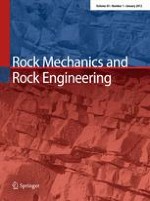 Study on Rock Bolt Reinforcement for a Gravity Dam Foundation