Land use Prior to Installation of Ground-mounted Photovoltaic in Germany—GIS-analysis Based on MaStR and Basis-DLM | springerprofessional.de Skip to main content
SUCHE MENÜ 1 2 3 4

Ground-mounted photovoltaic (GM PV) in Germany has seen strong growth rates in recent years and is expected to play a considerable role in the country’s future energy supply. The national political goal of reducing the land use change of agricultural land to net-zero by 2050 stands in contrast with the growth, meaning, that conflicts of land use objectives may arise. Systematic monitoring of land use change due to GM PV is required to identify potential land use conflicts at an early stage. Comprehensive monitoring has not yet been carried out. In order to identify the current land use for GM PV as well as the previous use of the land, data from the Marktstammdatenregister (MaStR) and the Digital Basic Landscape Model (Basis-DLM) are combined. By 2018, 11.37 GWp of GM PV had been installed on 25,500 ha. Of the 25,500 ha, more than half (13,292 ha) was arable land, 3807 ha was grassland, 7454 ha was former industrial land (conversion area) and 948 ha was other land. Compared to previous estimates of land demand, this shows a 51% higher use of previously agriculture land. Considering the entire GM PV inventory, the current average specific land use efficiency is around 2.2 ha/MWp, which is higher than indicated in the literature (1.3 ha/MWp). The strongest expansion of GM PV can be seen in the north, north-east and south-east of Germany. Overall, land use competition is low, as the average share of GM PV on agricultural land is only 0.1%. Even though a higher density of installations can be observed in some regions, the shares of GM PV on agricultural land are still very low here at 0.5%. Nevertheless, a stronger expansion can lead to increased regional concentrations and thus land use conflicts.
Anzeige
Vorheriger Artikel Lernen von Erfahrungen mit Infrastrukturprojekten – Konfliktauslöser und -bearbeitung
Nächster Artikel Veranstaltungskalender

Titel
Land use Prior to Installation of Ground-mounted Photovoltaic in Germany—GIS-analysis Based on MaStR and Basis-DLM
verfasst von
Jonas Böhm
Dr. Thomas de Witte
Coline Michaud 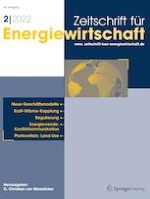