Integral to the natural process of the earth’s surface geology, landslides serve to redistribute soil and sediments in a process that can be recognized in abrupt collapses or in slow gradual slides. In March 1913, a significant volume of rock debris collapsed from the footwall of an active fault in the Krathis River basin, located at the southern part of the Gulf of Corinth. It moved downslope at a speed of 60 km/h, destroying Sylivaina village, located between Akrata and Kalavrita in NE Achaia, and impounding two lakes within Krathis River basin as first mentioned in the local and national press. Almost 10 months after the landslide, newspapers of that period documented a massive flood event through overtopping and breaching of the in-stream lake. However, during the outburst flood event, the off-stream lake remained unaffected and is considered as being in equilibrium state. By integrating new and existing geomorphological, structural and geological information, we associate the 1913 landslide to recent tectonic activity and moderate earthquake activity, investigating the role of active faults in controlling the size, geographical distribution and clustering of landslides in the active range. The case of Krathis River damming is significant because it combines the creation of a natural dam and the catastrophically short-term outburst of the impoundment lake. Therefore, this case study is an optimal site for investigating landsliding and river damming in an area of high seismicity and steep morphology showing an abundance of recent and historical landslide failures. 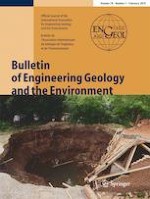 A new quality factor for the building stone industry: a case study of stone blocks, slabs, and tiles

Application of the comprehensive forecast system for water-bearing structures in a karst tunnel: a case study

Classification of geological and engineering properties in weak rock: a case study of a tunnel in a fault zone in southeastern Korea