The synthesis of nanostructured metal–carbon materials by laser irradiation is an actual branch of laser physics and nanotechnology. Laser sources with different pulse duration allow to change the heating rate with realization of different transition scenarios and synthesis materials with various physical properties. We study the process of the formation of nanostructured metal–carbon clusters and complexes using laser irradiation of colloidal systems which have been consisted of carbon micro- nanoparticle and nanoparticle of noble metals. For carbon nanoparticle synthesis we use the method of laser ablation in liquid. For the realization of different regimes of laser surface modification of the target (glassycarbon and shungite) and the formation of micro- nanoparticle in a liquid the YAG:Nd laser with a pulse duration 0.5 ms up to 20 ms (pulse energy up to 50 J) was applied. We have used the CW-laser with moderate intensity in liquid (water or ethanol) for nanoparticle of noble metals synthesis. Thus, colloidal systems were obtained by using CW-laser with λ = 1.06 μm, I ~ 105–6 W/cm2, and t = 10 min. The average size of resulting particles was approximately about 10–100 nm. The nanoparticle obtaining was provided in the colloidal solution with different laser parameters. In this work we investigated the mechanism of the metal–carbon cluster formation during the process of colloidal system irradiation which has been consisted of separate carbon, silver and gold nanoparticles. This system was irradiated by nanosecond laser (100 ns) with average power up to 50 W. 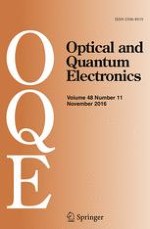 Investigating the use of AlN substrate in plasmon-based optical sensor: performance evaluation