Experiments were carried out to determine the leaching mechanism of benzalkonium chloride (BAC) from treated wood in soil. Wood specimens were treated with C12, C14 and C16 BAC homologues and exposed to soil or aqueous solutions containing oxalic acid, sodium oxalate, hydrochloric acid, sodium chloride or sodium humate. The leaching rates of the homologues in soil were close to each other and all higher than in distilled water. The order of the rates in soil (C12 ≈ C14 ≈ C16) was different from that in distilled water (C12 > C14 > C16). The leaching rates of the homologues in the acidic solutions and their salts solution were also higher than in distilled water, and the order of the rates was the same as in distilled water. The aqueous solution of sodium humate also accelerated homologue leaching but resulted in an order of C16 > C14 > C12. The BAC leaching acceleration mechanism by humate was thought to be different from the mechanisms of acids and their salts and plays an important role in the leaching behaviour of BAC in soil. 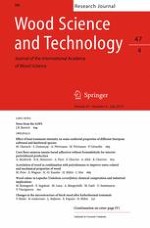