Unsafe lead (Pb) concentrations in leafy vegetables raised in urban and peri-urban agricultural production systems have been reported across cities in Northern Nigeria, even though Pb concentrations in soils are within regulatory safe levels. This study examined the soil enrichment, adsorption and chemical species of Pb in urban garden fields irrigated with untreated wastewater at three industrial locations in Kano, northern Nigeria. Total Pb in the soil profiles ranged from 9 to 91 mg kg−1 and decreased rapidly from the surface to the subsurface layer, but attaining nearly constant concentration at depth ≥1.2 m in the profiles. The potentially labile Pb maintained fairly constant concentration with depth up to 0.9 m, but decreased fairly rapidly with depth thereafter. There was a significant Pb enrichment of the soils, extending up to 30–60 cm depth in the soil profiles. The adsorption of Pb by the soils increased drastically with pH, and attained maximum adsorption at pH ≥ 7.0 in the surface layer, and at pH ≥ 6 in the subsurface layer. The surface soils adsorbed between 85 and 97 % of added Pb at pH ≤ 5. Free Pb2+ activities in soil solution accounted for between 46 and 87 % at pH 5–7 of total dissolved Pb (PbT). The quantifiable chemical species of Pb in solution consisted mainly of PbOH+, PbSO 4 · , PbCl+ and PbOH 2 · which accounted for between 0.9 and 26 % of PbT in soil solution at pH ≥ 5.0, but declining to between 0.1 and 2.1 % at pH ≥ 7.5. There was no apparent equilibrium between Pb2+ activities and known Pb-compounds in the soils. It was concluded from the data that reports of excess Pb concentrations in leafy vegetables raised in these soils are consistent with high free Pb2+ activities maintained in soil solution by these predominantly sandy-textured soils. 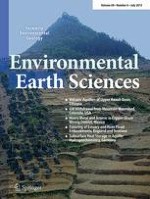 Hydrochemical and isotopic study of groundwater in the Yinchuan plain, China

Erratum to: Arsenic movement and traces in the groundwater from the Hetao Area, Inner Mongolia

Assessment of climate change impact on the stream-flow in a typical debris flow watershed of Jianzhuangcuan catchment in Shaanxi Province, China

Evaluation of groundwater withdrawal from a mountain watershed, Colorado, USA