Learning automata is an abstract model which randomly selects one action out of its finite set of actions and performs it on a random environment. Environment then works based on the selected action and responses to the automata with a reinforcement signal Based on selected action, and based on received signal, the automata updates its internal state and selects next action. Figure  2 depicts the relationship between an automata and its environment.
×
Environment can be defined by the triple \(E\equiv \{\alpha , \beta ,c\}\) where \(\alpha \equiv \{\alpha _1, \alpha _2, \ldots ,\alpha _r \}\) represents a finite input set, \(\beta \equiv \{\beta _1, \beta _2,\ldots ,\beta _m \}\) represents the output set, and \(c\equiv \{c_1,c_2,\ldots ,c_r \}\) is a set of penalty probabilities, where each element \(\hbox {c}_{\mathrm{i}}\) of c corresponds to one input action i. Environments in which \(\beta \) can take only binary values 0 or 1 are referred to as P-models. A further generalization of the environment allows finite output sets with more than two elements that take values in the interval [0,1]. Such an environment is referred to as Q-model. Finally, when the output of the environment is a continuous random variable which assumes values in the interval [0,1], it is referred to as an S-model. Learning automata are classified into fixed-structure stochastic, and variable-structure stochastic. In the following, we consider only variable-structure automata.
A variable-structure automaton is defined by the quadruple \(\{\alpha ,\beta ,p,T\}\) in which \(\alpha =\{\alpha _1,\ldots ,\alpha _r \}\) represents the action set of the automata, \(\beta =\{\beta _1 ,\ldots ,\beta _m \}\) represents the input set, \(p=\{p_1,\ldots ,p_r \}\) represents the action probability set, and finally \(p(n+1)=T[\alpha (n),\beta (n),p(n)]\) the learning algorithm. This automaton operates as follows. Based on the action probability set \(p\), automaton randomly selects an action i, and performs it on the environment. After receiving the environment’s reinforcement signal, automaton updates its action probability set based on Eq. ( 1) for favorable responses, and Eq. ( 2) for unfavorable ones.
$$\begin{aligned} p_i (n+1)&= p_i (n)+a[1-p_i (n)]\nonumber \\ p_j (n+1)&= (1-a)p_j (n) \qquad \forall j \,\,j\ne i\end{aligned}$$
(1)
$$\begin{aligned} p_i (n+1)&= (1-b)p_i (n)\nonumber \\ p_j (n+1)&= (b/{r-1})+(1-b)p_j (n) \quad \forall j \,\,j\ne i \end{aligned}$$
(2)
In these two equations, \(a\) and \(b\) are reward and penalty parameters respectively. For \(a =b\), learning algorithm is called \(L_{R-P}\), 1 for \(a < < b\), it is called \(L_{R\_P}\), 2 and for \(b = 0\), it is called \(L_{R-I}\). 3
For more information about learning automata the reader may refer to [ 13]. Learning automata has been recently used successfully in the area of WSN; LABER: A Learning Automata Based Energy-aware Routing Protocol for Sensor Networks [ 14], A cellular learning automata based clustering algorithm for WSNs [ 15], Dynamic point coverage in WSNs: A learning automata approach [ 16], Data aggregation in sensor networks using learning automata [ 17], A learning automata based scheduling solution to the dynamic point coverage problem in WSNs [ 18], Dynamic Point Coverage Problem in WSNs: A Cellular Learning Automata Approach [ 19], EEMLA: energy efficient monitoring of WSN with learning automata [ 20], A cellular learning automata-based deployment strategy for mobile WSNs [ 21], to mention a few.

The aim of the proposed protocol is at minimizing the number of active nodes as well as the slack time during mobicast sessions. To this end, we make use of Face-aware mobicasting enhanced with learning techniques.
First, we have to precisely define the concept of “spatial neighborhood”. On a planar graph, each node has one or more adjacent faces. We define the “spatial neighborhood” of a node in a planar graph to be the set of nodes in all faces adjacent to that node except the node itself. In the proposed algorithm, we assume that every node knows its spatial neighbors. In what follows, we first describe the message formats used in the proposed algorithm and then, present the algorithm operation.

Each node in the network is equipped with a learning automaton. The learning automata embedded in each node has two actions: “sending” and “not sending”. In the beginning, the probability of “sending” action is equal to 1 and the probability of “not sending” action is equal to 0. According to FAR protocol, when a mobicast message \(m\) arrives at a node \(n_{i}\), if at least one of the spatial neighbors of \(n_{i}\) is in the delivery zone, \(n_{i}\) must rebroadcast the message. But, in the proposed protocol, \(n_{i}\) does this only if its learning automaton selects the “sending” action. If this action is selected, then \(n_{i}\) attaches its ID to the list of the last forwarder field, rebroadcasts the message locally considering the hold and forwarding zones and waits for a certain period \(\rho \). During this period, copies of the message \(m\) may be received at \(n_{i}\) from different paths. \(n_{i}\) ignores all of these copies except the last one, which is indeed received from the longest path. \(n_{i}\) then creates two signal messages; a positive one and a negative one. The positive signal will be sent along the path from which the original message \(m\) was received. On the other hand, the negative signal will be sent along the longest path. When a node receives a signal message, it updates the action probability vector of its learning automata according to Eqs. ( 1) and ( 2), if top ID in last forwarder field be equal with its ID. Note that the duplicate messages received after the period \(\rho \) are simply dropped, but considering long enough duration for \(\rho \), this can be happened very rarely. In Fig.  3, a typical example of the execution of the proposed algorithm (b) and FAR algorithm (a) is depicted. In this example the moving target moves from a similar path multiple of times, so the proposed algorithm converged and only shortest paths remained active.
×
It’s important to know that at the beginning, the proposed algorithm and FAR algorithm perform the same, but when the moving target repeats its moving path, the proposed algorithm learns that path and thus, become superior to FAR in terms of the number of active nodes. The guaranty level of the proposed algorithm is the same as that of FAR.

In order to study the performance of the proposed protocol, multiple protocols and the proposed protocol are simulated using J-SIM. We focus on three metrics to compare protocols: Slack time, Message exchange, and number of active nodes.
The simulation consist of 800 node dispersed randomly with a uniform distribution in an area of 1,000 \(\times \) 600 m \(^{2}\). The delivery zone assumed a rectangle with size \(30 \times 10\,\hbox { m}^{2}\) that moves with constant velocity 40 m/s in a straight line. The mobile entity moves the same path multiple times while our algorithm be converged. So our algorithm in the worst case is like the FAR protocol, but with multiple path of mobile object it converges and results has been so better. Note that the \(a\) and \(b\) parameters of nodes learning automata is considered to be 0.5 and 0.01 respectively.
Slack time is a metric that shows how much time mobicast packets delivered sooner. Figure  4 depicted comparison of three different protocols. The X axis is the expected delivery deadline for nodes in each location, i.e. the first time they are expected to enter the delivery zone. If a node get the packet before deadline, it was locate in top of X axis, otherwise it was locate under X axis. The Y axis show amount of slack time. Diamond signs shows flooding protocol that broadcast messages to all nodes with as-soon-as possible strategy in network. Square signs shows FAR mobicast protocol. Finally, the triangles shows our algorithm slacktime. The Broadcast delivery has worst slack time because upon a packet received, it forward it. In our protocol because only a small number of nodes are active and only shortest paths are active it’s so closed to delivery deadline.
×
Message exchange is the number of packets exchanged between nodes across mobicast session. The message exchange load of forward-zone constrained (FZC) and FAR mobicast protocols are relatively same over multiple pass of mobile object from same path (because FAR has bigger messages, in Fig.  5, its exchanged data is slightly bigger than FZC protocol) but our protocol in first multiple passes, have higher load, but load is reduced by increasing the same path traversing. After a certain passes and strengthen the shortest paths (learning automata converged), the load of message exchange will be constant.
×
As presented in Fig.  5, in the few first passes the bulk of exchanged data are high but with removing longest paths from message dissemination process, it reduces significantly. In the end of curve, because only shortest path reminded, bulk of exchanged data become stable.
Number of active nodes is number of nodes that activated during mobicast session. As shown in Fig. 6, this is obvious in the first pass of mobile entity, number of nodes that activated in our protocol is exactly equal to FAR protocol. But with repeat passage after a while only shortest paths remain active so number of active nodes in our protocol decrease dramatically.
× 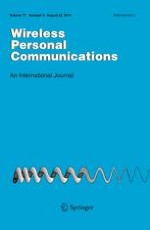 Improving the Performance of Spatial Modulation Schemes for MIMO Channels