We consider the problem of devising a unified control policy capable of regulating both the robot motion and its physical interaction with the environment. We formulate this control policy by a non-parametric potential function and a dissipative field, which both can be learned from human demonstrations. We show that the robot motion and its stiffness behaviors can be encapsulated by the potential function’s gradient and curvature, respectively. The dissipative field can also be used to model desired damping behavior throughout the motion, hence generating motions that follows the same velocity profile as the demonstrations. The proposed controller can be realized as a unification approach between “realtime motion generation” and “variable impedance control”, with the advantages that it has guaranteed stability as well as does not rely on following a reference trajectory. Our approach, called unified motion and variable impedance control (UMIC), is completely time-invariant and can be learned from a few demonstrations via solving two (convex) constrained quadratic optimization problems. We validate UMIC on a library of 30 human handwriting motions and on a set of experiments on 7-DoF KUKA light weight robot. 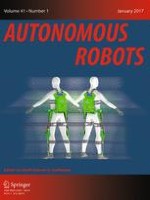