Levels of organochlorine pesticides in natural water along the Yangtze River, from headstream to estuary, and factors determining these levels | springerprofessional.de Skip to main content
TOOLBAR 1 2 3 4
SUCHE MENÜ 1 2 3 4

Organochlorine pesticides (OCPs), including hexachlorocyclohexane and dichlorodiphenyltrichloroethane, were monitored in 37 samples of water collected along the Yangtze River, the third longest river in the world (6,300 km). The total concentration of OCPs (∑OCPs) in the river water ranged from 0.11 to 27.37 ng/L. It was interesting to discover that, except for some sites near industrial cities, levels of OCPs in the water samples were very similar along the whole river. Significantly, OCPs were detected in Tuotuo River (the origin of Yangtze River) even though OCPs have never been used in this area because of its 4,540 m height above sea level. Furthermore, it was found that ∑OCPs was related to temperature and altitude along the river. We assume OCPs are transported along the Yangtze River, and the factors affecting this process are discussed. 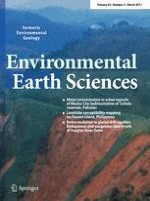 A study of the factors and processes involved in the sedimentation of Tarbela reservoir, Pakistan