The goal of this paper is to describe the life cycle inventory (LCI) approach of energy produced by ArcelorMittal Steel Power Plant Poland (AMSPPP) in Krakow, Poland. The present LCI is representative for the reference year 2005 by application of ISO 14040: 2006. The system boundaries were labeled as gate-to-gate (it covered full process chain for energy production). Background data of inputs and outputs from the steel power plant have been inventoried as follows: consumption of energy and fuels, including: power coal (domestic), natural gas, blast furnace gas and coke oven gas, emission of air pollutants, emissions of particulate, air emissions from stockpiles, wastes, internal transport, and land use.

This is the first tentative study to express energy generation in industry in Poland in terms of LCA/LCI for the energy power in steel industry. The results of the study suggest that reduction of the amount of power coal leads to saving of primary resources and reduction of SO2 emissions, decrease land occupation caused by power coal stockpiles, and increase recovery of the blast furnace gas, as well as, coke oven gas surplus. The results may help ArcelorMittal Steel Plant government make decisions in policy making. Presentation of the study in this paper is suitable for the energy production processes, as well as other industries. 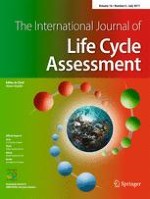 Are public payments for organic farming cost-effective? Combining a decision-support model with LCA

Case study on the carbon consumption of two metropolitan cities