Fire transforms the structure of natural habitats and, consequently, modifies microclimates affecting ectotherm organisms that are particularly susceptible to changes in the thermal environment. Nevertheless, the effects of fire-induced microclimatic shifts upon natural populations have been neglected. We measured the central tendency and variation of habitat structural and microclimatic variables in experimental plots of Neotropical savanna vegetation subjected to different fire regimes and assessed their effects upon lizard community structure. In addition, we evaluated the underlying mechanisms linking fire-induced environmental changes to community structure, by comparing lizard body condition and survival between different fire regimes. Fire suppression promoted increased tree density, canopy cover and leaf-litter weight, whereas burning had the opposite effects, reducing the habitat structural complexity. The best predictors of fire regimes were means of structural variables, but variances of microclimatic variables, and the reduced structural complexity of burned plots both increased and decreased the variation of microclimatic variables. Lizard community structure was chiefly described by a gradient of decreasing tree density, canopy cover and leaf litter weight with increasing fire severity. About half of the lizard species were favored in the fire-protected plot, while the other half was favored in the burned plots, with most of the variation being explained by structural variables. Lizard body condition and survival rates were not affected by fire regimes, suggesting a dominant role of thermoregulation opportunities afforded by habitat structure—instead of food availability or predation rates—upon community structure. Our findings indicate that even sporadic fires can have profound effects upon lizard communities and that protecting some habitat patches from burning is essential to maximize lizard diversity in Cerrado landscapes. 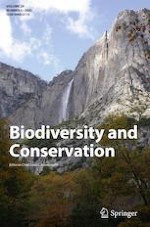 Reintroduction of songbirds from captivity: the case of the Great-billed Seed-finch (Sporophila maximiliani) in Brazil

Overcoming the worst of both worlds: integrating climate change and habitat loss into spatial conservation planning of genetic diversity in the Brazilian Cerrado