The main scope of this paper consists in presenting an original contribution for the estimation of measures of monetary and multi-dimensional poverty in a longitudinal context; we also provide empirical on how this could be very useful in explaining the different recovery in three Visegrad Countries from the 2008 crisis. The traditional approach of poverty, defined by the dichotomy (poor, non-poor) is replaced by a defining based on the concept “a matter of degree”, which could briefly be defined as the position of an individual in the income distribution, or in any other variable’s distribution taken into account in a multidimensional approach. Another original contribution of the paper consists in proposing rules for the intersection and union of fuzzy sets, which we demonstrate to be appropriate for the study of poverty and deprivation, especially when the approach is applied to a time sequence in a longitudinal perspective; in particular, we propose the new ‘fuzzy “At-persistent-risk-of-poverty rate”, which can be seen as the fuzzy alter ego of the well-known Eurostat Laeken indicator. 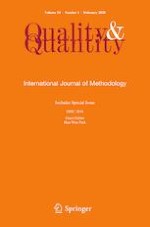 On measuring complexity in a post-industrial economy: the ecosystem’s approach