Magnetic Moment and its Correlation with the Critical Temperature in YBCO | springerprofessional.de Skip to main content
TOOLBAR 1 2 3 4
SUCHE MENÜ 1 2 3 4

» Jetzt Zugang zum Volltext erhalten
Abstract: In the present work, nanoparticles were doped into superconductor samples of YBa2Cu3O7-δ (YBCO) + X, where X = 0.1, 0.2, 0.3, 0.4, and 0.5 mass-%, respectively of "nanosized metal oxides" namely Mn3O4, Co3O4, Cr2O3, CuO, and SnO2 which are synthesized by a solid-state reaction route. The phase identification and microstructure of all samples was examined by X-ray diffraction (XRD), scanning electron microscopy (SEM), and transmission electron microscopy (TEM) techniques. The XRD patterns indicate that magnetic doping with Mn3O4, Co3O4, and Cr2O3 leads to improved orthorhombic character in the YBCO samples which is the result of a high oxygen content, and consequently may give improved superconducting properties compared to the nonmagnetic nano-oxides CuO and SnO2. The gross structure of YBCO does not change with the substitution of the three types of magnetic nanosized metal oxides with different doping levels. In addition, the results show that the critical transition temperature (Tc) decreases with increasing doping level. The Tc value for Mn3O4 was high which may be due to flux pinning from defects. The rapid suppression in Tc with increasing concentration of Mn3O4 may be due to Cooper-pair breaking and hole filling in the CuO planes. Further doping of nanomagnetic and nonmagnetic oxides affects the crystallinity and homogeneity of the YBCO samples. 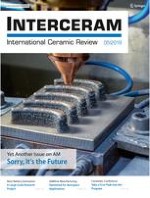 Ceramitec Conference: Take a First Peak into the Program

The Next Generation of Batteries: A Large-Scale Research Project