Because of the rapid uplift of the Tibetan Plateau since the middle and late Pleistocene, the surrounding mountainous areas of the Tibetan Plateau also show a rapid uplift trend. The study area is located in the upper reaches of the Jinsha River, southeastern Tibetan Plateau. Tectonically, the study area is located in the eastern segment of the Jinshajiang suture zone, which is the weak belt of the lithosphere. Affected by the rapid uplift, steep slopes are formed by the rapid vertical down-cutting of rivers in the studied reach. Under the sustained action of the gravitational field, the deformation and failure of slopes readily occur. To better formulate development and risk mitigation plans, a mass movement inventory map at the scale of 1:50,000 was prepared for the 100 km long reach. A total of 247 mass movements of different types, sizes and relative ages were mapped via image interpretation and detailed field survey. The statistical analysis of their spatial distributions was performed using two relative concentration indexes. The correlations between the spatial distribution and six common factors were analyzed: elevation, slope angle, slope aspect, lithology, active fault, and river system. The geomorphological survey shows that the mass movements locally play an important role in the present-day landscape evolution. In addition, the geomorphic features indicate that the mapped giant landslides can be classified as very old landslides, and they very likely occurred under a different morphoclimatic environment than that of the present. 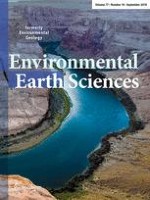 Analyzing rainfall seasonality and trends in the North Maharashtra region