The welding process which is one of the most important assembly processes is widespread in the modern manufacturing industry, including aerospace, automotive and engineering machinery. The welding shop scheduling greatly impacts the efficiency of whole production system. However, few studies on the welding shop scheduling problem (WSSP) were reported. In this paper, a mathematical model and an improved discrete artificial bee colony algorithm (DABC) are proposed for the WSSP. Firstly, it is defined where multi-machine can process one job at the same time in the WSSP. Secondly, the mathematical models of WSSP have been constructed. Thirdly, an effective DABC is proposed to solve the WSSP, considering job permutation and machine allocation simultaneously. To improve the performance of proposed DABC algorithm, the effective operators have been designed. Three instances with different scales are used to evaluate the effectiveness of proposed algorithm. The comparisons with other two algorithms including genetic algorithm and grey wolf optimizer are also provided. Experimental results show that the proposed model and algorithm achieve good performance. Finally, the proposed model and DABC algorithm are applied in a real-world girder welding shop from a crane company in China. The results show that proposed model and algorithm reduces 55.17% production time comparing with the traditional algorithm and the scheduled machine allocation provides more reasonable arrangements for workers and machine loads. 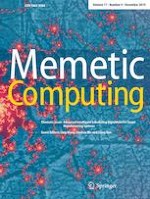 Project portfolio selection and scheduling under a fuzzy environment