A long-term disposal of a nuclear waste package requires a matrix material that possesses a high thermal conductivity in order to release the decay heat from the fission products. In this study, the thermal diffusivity (α) of alumina borosilicate glass (ABG), encapsulating surrogated tristructural-isotropic (TRISO) particles, has been measured experimentally using the laser flash analysis (LFA) methodology. Image-based models were developed using X-ray computed tomography for glass samples bearing different proportions of TRISO particles. Simpleware software generated finite element (FE) models which then were solved using Abaqus software. The matrices were examined at different waste loadings (10, 20 and 30 wt%) at a temperature of 50 °C. The modelling results were in close agreement with the experimental results and the deviations were within the bounds of standard numerical error (<5 %). The thermal diffusivity of the samples was increased with increasing proportion of TRISO particles. For the maximum mechanically stable matrix, the thermal diffusivity was found to be 0.92 ± 0.021 × 10−6 and 0.94 × 10−6 m2 s−1 measured by LFA and modelling, respectively. 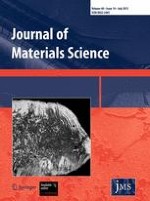