This experimental work studies an acoustically forced jet with a high degree of accuracy. It investigates how the acoustical forcing changes the flow structure in the early development zone and in the far field and how the initially periodical flow structures with a low level of turbulence vanishes (converting its kinetic energy into turbulent energy). Finally, the jet is loaded with small glass spheres with a small particle/gas mass ratio (η M = 0.0704), and the effects of the dispersed phase on the gas flow are characterized. The velocity signal was measured using Doppler velocimetry along the whole forcing cycle. This allows authors to reduce measurement bias due to an inhomogeneous tracer seeding. This inhomogeneity is caused by the ingestion of surrounding gas, which is highly enhanced by the coherent flow structures. The signal velocity was analyzed in the spectral domain, and several ad hoc variables were defined to quantify the evolution of the quasi-periodical flow structure along all the jet as well as the relative importance of turbulence. The jet is highly distorted in the early development of the flow with a nonlinear growth of the velocity perturbations. After that, the periodical structure vanishes and just an unperturbed jet remains. But this unforced jet shows a very early self-preserving behavior for the first and second velocity moments because the coherent kinetic energy is transferred to the turbulence and the last is suddenly promoted. The particle-laden jet shows similar trends but the coherent perturbations disappear faster despite the small particle/gas mass ratio. The high-density particle clusters induced by the acoustic forcing seems to be the cause of this since the momentum exchange and dissipation are highly enhanced inside the clusters and can change the nonlinear growth of the velocity perturbations. 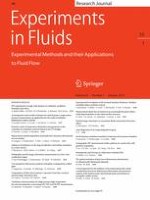