Accurate streamflow measurements are often challenging for extremely shallow rivers within complex bathymetries. In this study, a new version of the fluvial acoustic tomography (FAT) system operated by high-frequency 53-kHz underwater acoustic transducers was used to measure the discharge of a shallow mountainous river. The system was placed under a stringent site condition that was challenging for receiving pure underwater acoustic signals and hence, resulted in low-quality estimates of the river discharge. To overcome this challenge, the shortest path graph method was adopted to capture the desired hydroacoustic data, which can improve the discharge measurements significantly. The results showed that the discharge estimated by the FAT was in very good agreement with that estimated by the rating curve method, suggesting that the FAT was capable of measuring the river discharge for shallow streams when the minimum water depth for a given cross-section was greater than 28 cm. In addition, the findings of this study indicated that under the low-flow condition, the temperature variations during the daytime and nighttime along the acoustic cross-section can play an important role in reducing the signal-to-noise ratio, hence leading to sparse and weak signals of the arrival time, as recorded by the acoustic transducers. 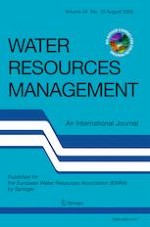 Cost Reduction in Pressurized Irrigation Networks under a Rotation Schedule