The reinforcement of shallow foundations of existing buildings is often obtained by using micropiles constructed through different kinds of technologies. This paper deals with some mechanical and structural aspects of a kind of innovative micropiles made with reinforced polyurethane resin. Three sample micropiles having different characteristics were installed and tested under compression in a site where a silty-clayey soil was present. On the basis of the test results, it was possible to evaluate which of the three sample micropiles offered the higher strength under compression load. This type of micropile was chosen for a deeper analysis regarding the main features linked to both the global mechanical behavior and the frictional resistance between the soil and the shaft surface. After a brief description of the construction method and the execution of the field load tests, the paper investigates the microstructure of the interface between soil and micropile. Moreover, some physical properties of the constitutive elements of the micropile are evaluated with the scope of calibrating the parameters required for a model of the micropile–soil mechanical interaction, recently introduced. The model seems to be suitable to interpret the mechanical field behavior of the structural element. The results suggest that even though the reinforced polyurethane resin micropiles present a rather low bearing capacity, the technology can be useful for underpinning works in very particular conditions. 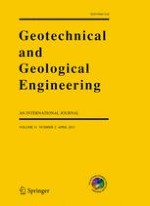 A Thermodynamics-Based Model on the Internal Erosion of Earth Structures

A Parametric Study on Stability of Open Excavations in Alluvial Soils of Lahore District, Pakistan