The dynamic crushing behaviors of FCC lattice structures with various rotation angles are explored by numerical simulations. According to the localization band formed by the cell collapse, several deformation modes are distinguished. The effects of the orientation angle and the crushing velocity on the mechanical properties of the lattice are investigated. It is shown that the deformation mode depends strongly on the orientation angle and the impact velocity, which can be plotted on a mode classification map. It also indicates that there exists an optimal orientation angle of the FCC lattice structure which corresponds to the highest plateau stress and thus the best energy absorption capacity. 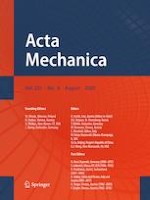 On finite bending of visco-hyperelastic materials: a novel analytical solution and FEM