A biocomposite prepared from poly(vinyl alcohol) (PVA) and oil palm fiber (OPF) is proposed with clarification of intermolecular interactions, physical properties, and biodegradability behavior. OPF in this study was converted from oil palm frond, which can be counted as value-added agricultural waste. The OPF content in the biocomposite is varied from 5 to 25 phr and glycerol is used as plasticizer. Scanning electron micrograph presents the good dispersion of OPF in hydrophilic PVA matrix, even at high OPF content of 25 phr. This result provides the improved compressive strength and modulus for 2 and 2.5 times, respectively, as compared to plasticized PVA. The successfully induced rigidity structure of OPF to biocomposite system is also confirmed by increasing of glass transition and melting temperatures, but decreased degree of crystallinity at high contents of OPF (20 and 25 phr). Moreover, the biocomposite with 25 phr OPF exhibits the increase of water resistance at 60% relative humidity obviously. In this study, biodegradability behavior is also traced by Fourier transform infrared spectra which suggests the fast degradation of highly moisture-sensitive PVA as compared with the highly crystalline fibrous structure of OPF. 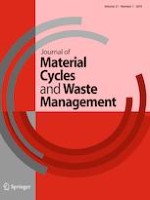 Challenges and opportunities for the recycling industry in developing countries: the case of Sri Lanka

Waste walnut shell as an alternative bio-based filler for the EPDM: mechanical, thermal, and kinetic studies

Waste separation at source and recycling potential of the hotel industry in Hoi An city, Vietnam