The online version of this article (https://​doi.​org/​10.​1007/​s10531-018-1566-2) contains supplementary material, which is available to authorized users.
This article belongs to the Topical Collection: Coastal and marine biodiversity.

This paper provides an inventory of non-indigenous bryozoan species (NIB) recorded in the Mediterranean Sea. Taking into account previous NIB lists and updated non-indigenous concept, a careful literature review was carried out, reporting data on 33 NIB from 14 Mediterranean countries (Algeria, Croatia, Cyprus, Egypt, France, Greece, Israel, Italy, Lebanon, Malta, Spain, Syria, Tunisia and Turkey). A total of 296 valid records were listed, including 6 yet unpublished. Other 62 records were labelled as uncertain and listed separately, until further analyses on taxonomic identity, non-indigenous status and distribution patterns of the species involved will clarify their status. The countries with the higher numbers of NIB and single records are Lebanon (20 and 78, respectively) and Italy (12 and 112, respectively). The distribution of NIB in the Mediterranean Sea appears scattered and no data are available at all for eight countries. Studies and monitoring efforts on bryozoans in the Mediterranean Sea are not evenly distributed, probably as a consequence of the decrease in number of expert taxonomists and the poor allocation of funds on biodiversity studies. The coordination among Mediterranean countries on standardised sampling methods is needed in order to create a comprehensive baseline knowledge on NIB distribution in the Mediterranean Sea and prioritise taxa and countries that are still poorly investigated. 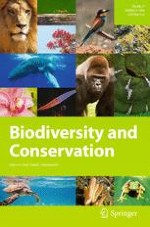 The use of response measures in meta-analyses of land-use impacts on ecological communities: a review and the way forward

Evolutionary history of campo rupestre: an approach for conservation of woody plant communities

The time has come: extending the role of scientists in conservation practices