Selective laser melting (SLM) is a metal additive manufacturing technology that directly forms three-dimensional complex components according to digital models via layer-by-layer addition. It has been widely used in medical personalization, aerospace, and other fields. To analyze the influence of different process parameters, such as the line energy density and hatch space on the SLM single-layer multi-pass formation process, a random particle distribution of the powder bed was first obtained via the open-source discrete element method (DEM) code Yade. The prediction model of the molten pool dynamic behavior during the SLM formation process was then established based on the “metal-gas” two-phase flow model. The conservation equation considered thermal factors, such as the Marangoni effect, the porosity in the mushy zone, and the gasification phenomenon. Laser energy was then applied by the body heat source model, which directly tracked the metal-phase surface affected by the laser in real time and applied energy to the metal-phase elements within a certain thickness. By analyzing the simulation results, it was found that to obtain a good formation zone in actual SLM production for 316L stainless steel, from the perspective of controlling line energy density, 200 J/m should be used to obtain a relatively flat solidified track and to establish a good connection with the substrate or the upper formation layer; from the perspective of controlling the hatch space, 45 μm should be used to ensure a good connection between adjacent solidified tracks, a relatively flat formation surface, and high production efficiency. These conclusions were consistent with the experimental results. This article offers a scientific rationale for parameter selection during the SLM formation process of 316L stainless steel. 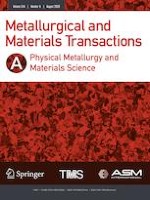 Modelling the Competitive Growth of Primary, Allotriomorphic, and Secondary Alpha in Ti-6Al-4V