In the present study, time course analysis of micromolding-polymerization, as a novel approach for preparation of nonspherical particles, was carried out in order to investigate the formation mechanism of polystyrene particles. It was observed that incomplete half-shell, porous half-shell, and pitted olive-like particle are produced during reaction, respectively. The results showed that the surface area of polystyrene (PS) particles remains constant with increasing styrene conversion from 63 % up to 84 %. In addition, it was shown that particles with high porosity can be obtained during polymerization. Moreover, the effect of particle size distribution of micromolds (solvent-swollen polymeric particles), the presence of an excessive amount of hydrocarbon in the media, and the type of initiator on the shape of particles were investigated. The effect of stabilizer type on the shape and stability of produced particles was another factor that was examined. Production of particles having an almond shell-like shape in the presence of an excessive amount of hydrocarbon was one of the interesting findings of this study. In addition, it was found that the particle shape remains constant with changing stabilizer and initiator type. 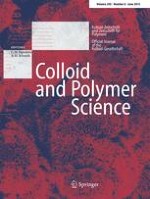 Deformation and relaxation of grafted polymer layers at elevated temperatures