Production of Al1050/TiO2-graphite hybrid nanocomposite via friction stir processing (FSP) was studied. The effect of graphite-to-TiO2 volume fraction ratio (Gr/TiO2), at a constant rotational speed (ω) and three levels of tool traverse speed (ν), on the microstructural evolution and mechanical properties of the nanocomposites was investigated. While TiO2 is supposed to enhance the strength and hardness, graphite is believed to improve the tribological behavior. Furthermore, formation of intermetallic compounds (IMCs) through the solid-state reactions between the reinforcements and aluminum matrix may also promote the mechanical properties. To assess these assumptions, longitudinal and transverse tensile strength, Vickers microhardness, and pin-on-disk wear tests were performed. Microstructural changes and formation of compounds were explored using optical microscopy and field-emission–scanning electron microscopy (FE-SEM) as well as X-ray diffraction (XRD). ω/ν and Gr/TiO2 ratios were introduced as the main parameters to obtain the desirable material flow and particle distribution. The hardness of the nanocomposites increased by superior distribution of the reinforcements throughout the matrix. The yield strength of the nanocomposites increased up to ~82 and ~50 pct compared to the as-received and friction-stir-processed Al1050 with no reinforcement, respectively. The tribological behavior of nanocomposites improved by the presence of the graphite acting as a solid lubricant on the sliding surface. 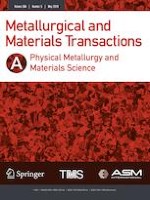 Electroless Codeposition of Ni-P Composite Coatings: Effects of Graphene and TiO2 on the Morphology, Corrosion, and Tribological Properties

Correction to: State of Grain Boundary Misorientation Due to Multiaxiality in Austenitic Stainless Steel