In this investigation, two duplex stainless steels (DSS), namely DSS A and DSS B, were made by pre-alloyed powders such as 310L and 430L using the method of powder metallurgy. Chromium, nickel and molybdenum were added with pre-alloyed stainless steel powders in appropriate proportions to obtain duplex composition. Two DSS composition powders were sintered at 1350 °C in two different atmospheres, i.e., partial vacuum and hydrogen. Sintered compacts were forged at the temperature of 1150 °C and quenched in water immediately. Forged DSS were observed and analyzed for densification, microstructural examination, ferrite count and pitting corrosion. For both the compositions (DSS A and DSS B), forged density is in the range of 7.73–7.79 g/cc. Microstructure of DSS A (partial-vacuum-sintered) revealed acicular and angular types of ferritic grains along with austenitic phase. DSS B revealed elongated (cell structure) ferrite grains of various sizes along with random orientation. Partial-vacuum-sintered steels contain more ferrite volume than hydrogen-sintered steels. The lowest current density of 3.04 E-5 mA/cm2 and the highest linear polarization resistance of 46,882 Ωcm2 have been exhibited for the hydrogen-sintered DSS B composition. 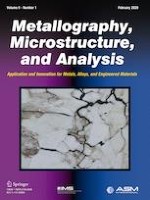 Annealing of a Nanostructured Bainitic Steel