The sintering mechanism of multiphase ceramic film—made of alumina, mullite and aluminum nitride—fabricated by water vapor-assisted sintering on Cr/WCu substrate was investigated. The multiphase ceramic film and interfacial reaction layer between ceramic film and Cr/WCu substrate were examined to reveal their microstructure by relevant test methods. The multiphase ceramic was composed of α-Al2O3 and mullite-coated aluminum nitride particles. During metastable stage, metastable alumina and amorphous silica were generated, which originated from AlN and PCS, respectively. A structure containing Al–Si–O glass and metastable alumina-coated AlN particle was formed. With firing temperature increasing to 1050 °C, Al–Si–O glass crystallized and generated crystal mullite. Meanwhile, α-Al2O3 was formed from metastable alumina. κ-Al2O3 and Al1.98Cr0.02O3 phases were observed in the interfacial reaction layer by high-resolution transmission electron microscopy. It revealed that the distances of (002) facet for κ-Al2O3 and (104) facet for Al1.98Cr0.02O3 were 0.447 nm and 0.255 nm, respectively. During water vapor-assisted sintering, κ-Al2O3 and Cr2O3 were generated, which were derived from AlN and Cr, respectively. When the sintering temperature was increased to 1050 °C, κ-Al2O3 and Cr2O3 would react with each other and generate Al1.98Cr0.02O3 phase. The Al1.98Cr0.02O3 phase was of great help to improving adhesion strength of multiphase ceramic film on Cr/WCu substrate. 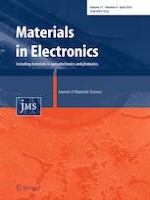 Novel nanocomposite decoy flare based on super-thermite and graphite particles