Mechanical properties of a REX734 austenitic stainless steel were examined through compression testing over a wide range of temperatures (1173 K to 1373 K (900 °C to 1100 °C)) and strain rates (0.1 to 40 s−1) that cover deformation conditions encountered in different metalworking processes. The evolution of microstructure was studied using electron microscopy combined with electron backscatter diffraction and energy-dispersive spectroscopy. Partially recrystallized microstructures were obtained after compression testing at 1173 K (900 °C), while after deformation at 1273 K and 1373 K (1000 °C and 1100 °C), the material was fully recrystallized almost in all examined cases. The role of dynamic and metadynamic restoration processes in the formation of final microstructure was investigated. Σ3 twin boundaries lost their twin character and transformed into general high-angle grain boundaries as a result of deformation, while during recrystallization new Σ3 twin boundaries formed. The evolution of precipitates during compression testing and their role in the recrystallization process was also discussed. 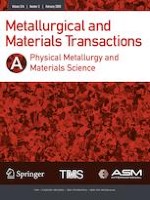 Correction to: The Observation of the Structure of M23C6/γ Coherent Interface in the 100Mn13 High Carbon High Manganese Steel

Prenucleation at the Interface Between MgO and Liquid Magnesium: An Ab Initio Molecular Dynamics Study