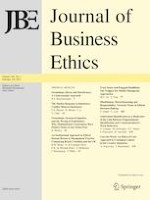 Sweatshops, Structural Injustice, and the Wrong of Exploitation: Why Multinational Corporations Have Positive Duties to the Global Poor

Care-ful Work: An Ethics of Care Approach to Contingent Labour in the Creative Industries

The Business of Virtue: Evidence from Socially Responsible Investing in Financial Markets