Mitigating the Impacts of Climate Change on the Performance of Multi-Purpose Reservoirs by Changing the Operation Policy from SOP to MLDR | springerprofessional.de Skip to main content
TOOLBAR 1 2 3 4
SUCHE MENÜ 1 2 3 4

In many parts of the world, especially in metropolitan areas with dry climates, shortages of freshwater resources have become a significant challenge in water resources management. Rapid population growth and climate change in these areas impose additional burdens on water consumption, especially on surface water resources, which are increasingly becoming scarce. In this study, a change from the Standard Operating Policy (SOP) to the Modified Linear Decision Rule (MLDR) policy is considered as a solution to mitigate the impacts of climate change on dams and reservoir operation. The two policies were compared by using five reservoir system performance indices (reliability, resiliency, vulnerability, sustainability and meeting demands) and three hydropower energy generation indices. This study pertained to the Karaj hydropower dam reservoir in Iran and speculated on 2020–2039. Changing the operation policy from current SOP to the MLDR policy can mitigate the adverse effects brought by climate change. According to the results, the SOP policy works best for reservoir operation if there is enough water (optimistic scenario). In the case of pessimistic scenarios (shortage of water), operating the reservoir system with SOP policy would turn into a crisis in supplying drinking water. On the other hand, the MLDR policy prevents the complete draining of the reservoir. In all water-demand scenarios, the MLDR policy reduces the amount of time (by over 90%) in which the reservoir remains empty, compared to the SOP policy. The final results demonstrate how the MLDR policy can mitigate the undesirable effects of climate change. 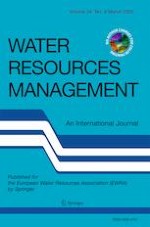