Mitigation of destructive fluid force on buildings due to trapping of floating debris by coastal forest during the Great East Japan tsunami | springerprofessional.de Skip to main content
TOOLBAR 1 2 3 4
SUCHE MENÜ 1 2 3 4

The effectiveness of coastal or inland forests in trapping floating debris produced by destructive tsunamis has long been discussed but never clarified quantitatively. To estimate the effectiveness, especially in reducing the damage to wooden buildings (houses) behind the forest, a nonlinear long wave equation model that includes not only destruction of the coastal forest but also a trap mechanism has been developed, and a simulation was conducted where trapping was observed during the 2011 Great East Japan tsunami. A post-tsunami survey of Sendai City showed that some houses just behind the coastal forest remained, although the inland-side houses were washed out. Based on the damage to houses, fragility curves as a function of moment by fluid force were analyzed. Although only the fringe of a coastal forest increases the fluid force due to a tsunami current concentration where a coastal forest is damaged, analyses using the model with and without the trapping function suggest that the debris-trapping function of a coastal forest greatly mitigates the damage observed in the post-tsunami survey, not only just behind the forest, but further inland, at around 1300 m from the coast. By including the trapping effect, the inundation height can be well reproduced, especially at around 2000–3000 m. The fluid force reduction was increased inland because some houses there remained standing in the tsunami and maintained resistance to the current. 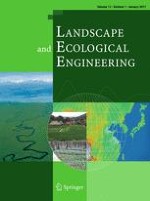 Regeneration properties of a Populus euphratica riparian forest located in the vicinity of the Ejina Oasis, Inner Mongolia, China