Photon squeezing and self-pumping within a nonlinear microring GaAsInP/P resonator are modeled and simulated, based on practical, published device parameters. A slowly varying amplitude pulse is input to the system, with a pulse width of 20 ns, a wavelength of 1.55 µm and peak power of 100 mW. The nonlinear effect resulting from the photons within the nonlinear ring resonator can be increased by adding external nonlinear coupling where, in this case, two nonlinear side rings are provided. The Dirac approach is used to generate the squeezed photons within the system. Three different device structures have been investigated, which include an add-drop filter, and a modified add-drop filter with two inner and outer side ring coupling resonators, where the nonlinear four-wave mixing effect is introduced. By using the commercial Opti-wave and MATLAB programs (in which suitable parameters have been chosen), the balance between the creation and annihilation operators can form the squeezed photons, which can be seen at the edge and center rings. The results obtained have shown that the squeezed center photon optical path (between 0 and 1 nm can be obtained) can be useful for interferometry, photon sources, and security code and sensor applications. 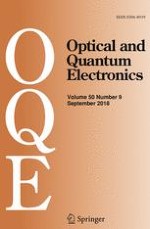 Study of some properties of quinone derivatives from quantum chemical calculations