Ammonia slip catalysts (ASC) are used downstream of the NH3-selective catalytic NOx reduction (SCR) system, to minimize ammonia slip from transport sector SCR units. The ASC may consist of an SCR active layer for NOx control, a layer with oxidation functionality for ammonia conversion, or a combination thereof, either as individual layers or as a single mixed layer. Mathematical models of such systems involve flow and mass transfer in the monolithic channels as well as coupled reaction/diffusion processes in the catalytic layers. In this work, we develop a single-channel 1D-1D (pseudo 2D) steady-state tank-in-series mathematical model for monolithic ammonia slip catalysts with up to two layers. Kinetics of relevant reactions over the Cu-Beta zeolite and the Pt/TiO2 layer, including SCR, ammonia oxidation, and the formation of N2O, were derived based on an extensive flow reactor study. The model was validated based on experiments using four different small-scale ASC monoliths, showing good agreement between the model predictions and the experimental results. Comparison of ten ASC configurations for the oxidation of 200 ppm NH3 at 300 °C shows that configurations with a pure layer of NH3 oxidation catalyst generate undesirable high N2O and NOx levels. The best ASC configurations feature fast diffusion in the catalytic layers (a high effective diffusion coefficient), a thin top layer loading with some ammonia oxidation catalyst, and a mixed layer of ammonia oxidation catalyst and the SCR catalyst to limit the formation of N2O and NOx. 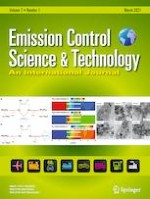 Application of a Diffusion Charger to Quantify Real-Time Particle Emissions from Light-Duty Vehicles: a Comparison Study with a Particle Size Spectrometer