Modeling of bore hydrographs to determine the impact of climate and land-use change in a temperate subhumid region of southeastern Australia | springerprofessional.de Skip to main content
TOOLBAR 1 2 3 4
SUCHE MENÜ 1 2 3 4

To determine the relative impact of climate and human intervention on groundwater elevations in western Victoria, southeast Australia, bore hydrograph fluctuations in three aquifers were modelled using a transfer function noise model (PIRFICT) and an auto-regressive model (HARTT), which give generally comparable results. Most of the groundwater-level fluctuations (>90%) are explained by climatic variation, particularly rainfall. The overall non-climate-related trend in groundwater level is downward and small but statistically significant (−0.04 to −0.066 m/yr), and is probably due to the widespread replacement of grazing land by wheat and canola cultivation, as these crops use more water than pasture. A large non-climate-related trend (−0.30 m/yr) for bores in an irrigation area is mainly related to groundwater extraction. The response time of the system is rapid (only 4.85 years on average), much faster than previously estimated. Rates of groundwater flow are much slower; groundwater ages are up to ~35,000 years. Response times effectively represent the time for the system to move to a new state of hydrologic equilibrium; this prediction of the time scale of the impacts of land-use change on groundwater resources will allow the development of better strategies for groundwater management.

Titel
Modeling of bore hydrographs to determine the impact of climate and land-use change in a temperate subhumid region of southeastern Australia
Autoren:
Yohannes Yihdego
John A. Webb 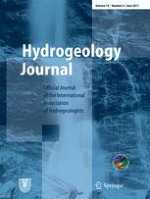 Major-ion chemistry, δ13C and 87Sr/86Sr as indicators of hydrochemical evolution and sources of salinity in groundwater in the Yuncheng Basin, China

Modelling the impact of a subsurface barrier on groundwater flow in the lower Palar River basin, southern India

Assessment of the development of aquifer management councils (COTAS) for sustainable groundwater management in Guanajuato, Mexico