This paper presents simulation results related to coupled thermal–hydraulic–mechanical (THM) processes in engineered barrier systems (EBS) and clay host rock, in one case considering a possible link to geochemistry. This study is part of the US DOE Office of Nuclear Energy’s used fuel disposition campaign, to investigate current modeling capabilities and to identify issues and knowledge gaps associated with coupled THMC processes and EBS–rock interactions associated with repositories hosted in clay rock. In this study, we simulated a generic repository case assuming an EBS design with waste emplacement in horizontal tunnels that are back-filled with bentonite-based swelling clay as a protective buffer and heat load, derived for one type of US reactor spent fuel. We adopted the Barcelona basic model (BBM) for modeling of the geomechanical behavior of the bentonite, using properties corresponding to the FEBEX bentonite, and we used clay host rock properties derived from the Opalinus clay at Mont Terri, Switzerland. We present results related to EBS host–rock interactions and geomechanical performance in general, as well as studies related to peak temperature, buffer resaturation and thermally induced pressurization of host rock pore water, and swelling pressure change owing to variation of chemical composition in the EBS. Our initial THM modeling results show strong THM-driven interactions between the bentonite buffer and the low-permeability host rock. The resaturation of the buffer is delayed as a result of the low rock permeability, and the fluid pressure in the host rock is strongly coupled with the temperature changes, which under certain circumstances could result in a significant increase in pore pressure. Moreover, using the BBM, the bentonite buffer was found to have a rather complex geomechanical behavior that eventually leads to a slightly nonuniform density distribution. Nevertheless, the simulation shows that the swelling of the buffer is functioning to provide an adequate increase in confining stress on the tunnel wall, leading to a stabilization of any failure that may occur during the tunnel excavation. Finally, we describe the application of a possible approach for linking THM processes with chemistry, focusing on the evolution of primary and secondary swelling, in which the secondary swelling is caused by changes in ionic concentration, which in turn is evaluated using a transport simulation model. 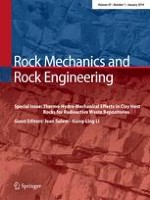 Consequences of the Thermal Transient on the Evolution of the Damaged Zone Around a Repository for Heat-Emitting High-Level Radioactive Waste in a Clay Formation: a Performance Assessment Perspective

ISRM Suggested Methods for Determining the Creep Characteristics of Rock

A Laboratory Experimental Study of the Hydromechanical Behavior of Boom Clay