In this paper, the coupled thermo–mechanical simulation of hot isostatic pressing (HIPing) is presented for metal powders during densification process. The densification of powder is assumed to occur due to plastic hardening of metal particles. The constitutive model developed is used to describe the nonlinear behavior of metal powder. The numerical modeling of hot powder compaction simulation is performed based on the large deformation formulation, powder plasticity behavior, and frictional contact algorithm. A Lagrangian finite element formulation is employed for the large powder deformations. A modified cap plasticity model considering temperature effects is used in numerical simulation of nonlinear powder behavior. The influence of powder-tool friction is simulated by the use of penalty approach in which a plasticity theory of friction is incorporated to model sliding resistance at the powder-tool interface. Finally, numerical examples are analyzed to demonstrate the feasibility of the proposed thermo–mechanical simulation using the modified cap plasticity model in the hot isostatic forming process of powder compaction. 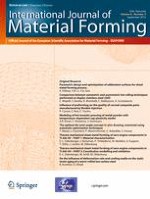