In the present work, a simplified model has been developed to study the behavior of stone column-supported embankment under axi-symmetric loading condition. The rate of consolidation of stone column-reinforced soft ground under axi-symmetric condition has also been presented in the paper. Mechanical model elements such as Pasternak shear layer, spring–dashpot system are used to model the different components such as granular layer, soft soil, stone columns etc. The governing differential equations are solved by finite difference technique. Parametric study has also been carried out to show the effect of different model variables on the settlement, stress concentration ratio of the foundation system. It is observed that for lower diameter ratio, at a particular time, the degree of consolidation predicted by the present method for axi-symmetric loading condition is almost same or lower than the degree of consolidation obtained by unit cell approach, but as the diameter ratio increases present analysis predicts higher degree of consolidation as compared to the unit cell approach. The maximum settlement decreases as the modular ratio increases and beyond the modular ratio value 30, the reduction rate of settlement decreases. 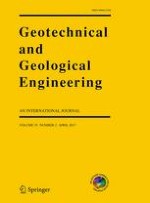 Assessment of Slope Stability for Deep Pits in Sedimentary Strata