Worldwide, agricultural crops are vulnerable to insects. During the crop season, insects target plants especially leaves for food and thus harm the agricultural crops. This reduces agricultural production and therefore effects the economy of farmers. To overcome this problem, nowadays farmers spray insecticides on crops to reduce the density of insects. In this paper, a nonlinear mathematical model is formulated to assess the impacts of insecticides on insects and crop production. In the modeling process, it is presumed that the agricultural crops grow logistically and the growth rate of the insect population wholly depends on the agricultural crops. As the excess use of insecticides on crops is harmful to agricultural farms and human health, therefore we have made an assumption that the spray rate of insecticides to kill insects is proportional to the density of insects. The feasibility of all the possible equilibria is shown and their stability properties are discussed. Keeping in mind the nonlinearity of the formulated model and different time scales of the participating variables, we have constructed a non-standard finite difference scheme by discretizing the system. It is shown that the proposed numerical scheme is convergent with second-order accuracy. Numerical simulation by using our computational scheme has been also presented to support the analytical findings. Using the approach of global sensitivity analysis, we have identified the key parameters for the formulation of effective control strategies necessary to combat the insect population and increase the crop production. Our findings suggest that to gain the desired crop production, the rate of spraying and the quality of insecticides are much important. 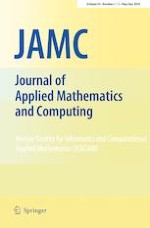 Ordering of c-cyclic graphs with respect to total irregularity