This paper explores how scientists perceive public engagement initiatives. By drawing on interviews with nanoscientists, it analyzes how researchers imagine science–society interactions in an early phase of technological development. More specifically, the paper inquires into the implicit framings of citizens, of scientists, and of the public in scientists’ discourses. It identifies four different models of how nanoscientists understand public engagement which are described as educational, paternalistic, elitist, and economistic. These models are contrasted with the dialog model of public engagement promoted by social scientists and policymakers. The paper asks if and in what ways participatory discourses and practices feed back into scientists’ understandings, thus co-producing public discourses and science. 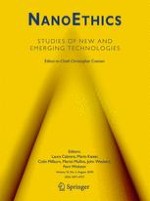 Nanomaterials in Cosmetic Products: the Challenges with regard to Current Legal Frameworks and Consumer Exposure

The Power of Analogies for Imagining and Governing Emerging Technologies

Science, Technology and the Public

Assembling Upstream Engagement: the Case of the Portuguese Deliberative Forum on Nanotechnologies