In the present study, we applied artificial neural network (ANN) optimized with particle swarm optimization (PSO) for the problem of landslide susceptibility mapping (LSM) prediction. Many studies have revealed that the ANN-based techniques are reliable methods for estimating the LSM. However, most ANN training models facing with major problems such as slow degree of learning system as well as being trapped in their local minima. Optimization algorithms (OA) such as PSO can improve performance results of ANN. Existing applications of PSO model to ANN training have not been used in area of landslide mapping, neither assess the optimal architecture of networks nor the influential factors affecting this problem. Hence, the present study focused on the application of a hybrid PSO-based ANN model (PSO-ANN) to the prediction of landslide susceptibility hazardous mapping. To prepare training and testing datasets for the ANN and PSO-ANN network models, large data collection (i.e., a database consists 168970 training datasets and 42243 testing datasets) were provided from an area of Layleh valley, located in Kermanshah, west of Iran. All the variables of PSO algorithm (e.g., in addition to the network parameter and network weights) were optimized to achieve the most reliable maps of landslide susceptibility. The input dataset includes elevation, slope aspect, slope degree, curvature, soil type, lithology, distance to road, distance to river, distance to fault, land use, stream power index (SPI) and topographic wetness index (TWI), where the output was taken landslide susceptibility value. The predicted results (e.g., from ANN, PSO-ANN) for both of datasets (e.g., training and testing) of the models were assessed based on two statistical indices namely, coefficient of determination (R2) and root-mean-squared error (RMSE). In this study, to evaluate the ability of all methods, color intensity rating (CER) based on the result of above indices was developed. Apart from CER, the total ranking system was also used to rank the obtained statistical indexes. As a result, both models presented good performance, however, according to the introduced ranking system, the PSO-ANN model could perform a better performance compared to ANN. According to R2 and RMSE values of (0.9717 and 0.1040) and (0.99131 and 0.0366) were found for training dataset and values of (0.9733 and 0.111) and (0.9899 and 0.0389) obtained for testing dataset, respectively, for the ANN and PSO-ANN approximation models, it can be resulted that PSO-ANN model showed higher reliability in estimating the LSM compared to the ANN. 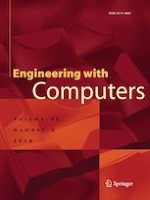