Ultrasonic testing is a non-destructive testing method of choice for estimating the anisotropic elastic properties of wood materials. This method is reliable for estimating the Young’s and shear moduli. However, its applicability to Poisson’s ratios remains uncertain. On the other hand, despite their destructive nature, mechanical tests allow a direct measurement of all elastic properties including the Poisson’s ratios. In some cases (e.g. when assessing cultural heritage objects), destructive testing may not be an option. In this work, two types of hardwood walnut (Juglans regia L.) and cherry (Prunus avium L.), which often appear on cultural heritage objects, were tested using both ultrasonic and mechanical testing methods under four different moisture conditions below fibre saturation point. The results show that a higher moisture condition leads to a decrease in material elasticity. For walnut wood, their longitudinal Young’s modulus (\(E_{\rm L}\)) was reduced by 679 MPa under the compression load for a one per cent increase in moisture content. Moreover, three ultrasound data evaluation techniques, which differ in the way they incorporate the Poisson’s ratios (full stiffness inversion, simplified uncorrected, and simplified corrected), were used to estimate the Young’s moduli (E). The main goal is to obtain reliable material parameters using the ultrasound test. As a result, it is concluded that the chosen data evaluation method influences the accuracy of the calculated E. In a certain case, the simplified-corrected method, which requires only one specimen type, gave a closer agreement to mechanical tests (e.g. \(\Delta E_{\rm T}=6\,\%\) deviation on mechanical results). In another case, the full-stiffness-inversion method, which requires four specimen types, gave the best estimation (e.g. \(\Delta E_{\rm L}=2\,\%\)). In this corresponding direction, the simplified-corrected method can only partially reduce the overestimation of the simplified uncorrected from \(\Delta E_{\rm L}=47\) to 32 %. The variation of E produced by different evaluation procedures is due to the different correction factor values, which is a consequence of the variation in \(\nu\). 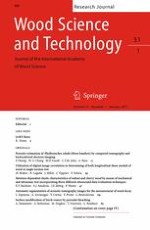 Erratum to: Dynamic simulation of disintegration of wood chips caused by impact and collisions during the steam explosion pretreatment