A non-equilibrium molecular dynamics method is employed to study the mechanical response of soda-lime glass (a material commonly used in transparent armor applications) when subjected to the loading conditions associated with the generation and propagation of planar shock waves. Specific attention is given to the identification and characterization of various (inelastic-deformation and energy-dissipation) molecular-level phenomena and processes taking place at, or in the vicinity of, the shock front. The results obtained revealed that the shock loading causes a 2-4% (shock strength-dependent) density increase. In addition, an increase in the average coordination number of the silicon atoms is observed along with the creation of smaller Si-O rings. These processes are associated with substantial energy absorption and dissipation and are believed to greatly influence the blast/ballistic impact mitigation potential of soda-lime glass. The present work was also aimed at the determination of the shock Hugoniot (i.e., a set of axial stress vs. density/specific-volume vs. internal energy vs. particle velocity vs. temperature) material states obtained in soda-lime glass after the passage of a shock wave of a given strength (as quantified by the shock speed). The availability of a shock Hugoniot is critical for construction of a high deformation-rate, large-strain, high pressure material model which can be used within a continuum-level computational analysis to capture the response of a soda-lime glass based laminated transparent armor structure (e.g., a military vehicle windshield, door window, etc.) to blast/ballistic impact loading. 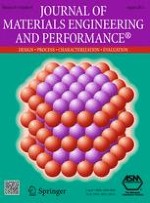 Study of the Diffusion of Carbon, Its Sources, and Effect on Finishing Micro-EDM Performance of Cemented Carbide