This paper compares the vulnerability of Borda Elimination Rule (BER) and of Nanson Elimination Rule (NER) to monotonicity paradoxes under both fixed and variable electorates. It is shown that while NER is totally immune and BER is vulnerable to monotonicity failure in 3-candidate elections, neither of these two rules dominates the other in n-candidate elections (n > 3) when no Condorcet Winner exists. When the number of competing alternatives is larger than three and no Condorcet Winner exists, we find profiles where NER violates monotonicity while BER does not, profiles where BER violates monotonicity while NER does not, as well as profiles where both NER and BER violate monotonicity. These findings extend to both fixed and variable electorates, as well as to situations where the initial winners under both rules are the same, as well as to situations where the initial winners under both rules are different. So, which of the two rules should be preferred in terms of monotonicity in n-candidate elections (n > 3) where no Condorcet Winner exists, depends on the kind of profiles one can expect to encounter in practice most often. Nevertheless, in view of the results of 3-candidate elections under other scoring elimination rules, we conjecture that inasmuch as BER and NER exhibit monotonicity failures, it is more likely to occur in closely contested elections. 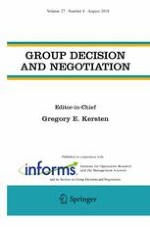 No Rage Against the Machine: How Computer Agents Mitigate Human Emotional Processes in Electronic Negotiations

Friend or Foe? A Reversal of Ingroup Bias

Twenty-Five Years of Group Decision and Negotiation: A Bibliometric Overview