Within the last decades, western democracies have experienced a rise of inequality, with the gap between lower and upper class citizens steadily increasing and a widespread sentiment of growing inequalities also in the political sphere. Against this background, and in the context of the current “crisis of democracy”, democratic innovations such as direct democratic instruments are discussed as a very popular means to bring citizens back in. However, research on direct democracy has produced rather inconsistent results with regard to the question of which effects referenda and initiatives have on equality. Studies in this field are often limited to single countries and certain aspects of equality. Moreover, most existing studies look at the mere availability of direct democratic instruments instead of actual bills that are put to a vote. This paper aims to take a first step to fill these gaps by giving an explorative overview of the outputs of direct democratic bills on multiple equality dimensions, analyzing all national referenda and initiatives in European democracies between 1990 and 2015. How many pro- and contra-equality bills have been put to a vote, how many of those succeeded at the ballot, and are there differences between country groups? Our findings show that a majority of direct democratic bills was not related to equality at all. Regarding the successful bills, we detect some regional differences along with the general tendency that there are more pro- than contra-equality bills. Our paper sheds new light on the question if direct democracy can serve as an appropriate means to complement representative democracy and to shape democratic institutions in the future. The potential of direct democracy in fostering or impeding equality should be an important criterion for the assessment of claims to extend decision-making by citizens. 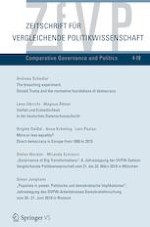